The intersection of art and science is a varied and multifaceted place. Much is indeed left to interpretation. However, without those whose creativity breaches the divide, there would be a terrific void in our experience and education of the subject of the environment be it climate change or appreciation of the world beyond ourselves. Below is an article that focuses on several women artists whose work pinpoints climate change action.

This week falls in between two of the largest planned protests for the environmental movement in recent history: last Saturday’s Earth Day March for Science and this coming Saturday’s People’s Climate March. Being a part of the resistance against an administration of climate change deniers can be a frustrating and sometimes soul-crushing experience (especially when you still have to get through a whole workweek between rallies). But in the meantime, we can find inspiration from female artists whose work helps remind us what we’re fighting for.

In 2005, just a few months before the Bush administration first publicly acknowledged that climate change was real and that humans had a hand in it, author and environmentalist Bill McKibben published a call to action in Grist, an online magazine, challenging artists to use their imaginations and talents to produce work that reflected the emerging crisis of climate change. “It may well be that because no one stands outside the scene, no one has the distance to make art from it. But we’ve got to try. Art, like religion, is one of the ways we digest what is happening to us, make the sense out of it that proceeds to action.”

That same year, on a coffee table in a living room in Los Angeles, twin sisters Christine and Margaret Wertheim began an art project that would soon grow to take over their entire house. Using a mathematical algorithm, they crocheted colorful frilly and tubular shapes, replicating the Great Barrier Reef that stretches off the shore of their native Queensland, Australia. The project drew inspiration from the work of mathematician Dr. Daina Taimina and combined hyperbolic geometry with the craft of crocheting.

Within a few years of its inception, the Crochet Coral Reef had spread far beyond the sisters’ house to cities including Chicago, New York, London, Capetown and Melbourne. Communities consisting primarily of women got involved and started making their own “satellite” reefs.

Through creating woollen corals, anemones, sea slugs and kelps, the Wertheim sisters and others paid homage to the world’s largest reef system. Stretching across over 1,400 miles and encompassing roughly 3,000 individual reefs, the Great Barrier Reef is one of the largest natural wonders of the world and has been a UNESCO World Heritage Site since 1981, but it is also extremely endangered. Continuously threatened by pollution, rising ocean temperatures and the acidification caused by climate change, the Great Barrier Reef made headlines this past October when Outside Magazine published a satirical obituary for the intricate ecosystem. The obituary quickly went viral and many assumed it to be factual before the scientific community jumped in to assure would-be mourners that much of the reef still remains (in critical danger) and needs our help now more than ever. An interactive and community-driven piece of art, the Crochet Coral Reef is an original example of how artists are raising climate change awareness and engaging a new audience.

The Crochet Coral Reef is regularly shown at museums around the world, including a recent exhibition at the Museum of Arts and Design in New York. Its presence opens up opportunities for discussion and calls attention to the immediate environmental crisis affecting marine life. Now, over a decade since it was started, the Crochet Coral Reef includes a large sub-reef that incorporates plastic trash with yarn in a visually jarring representation of the ever-accumulating toxic plastics and pollution that humans dump into the oceans. Another sub-reef uses white and cream colored pieces to mimic coral bleaching. Handcrafted by several artists, it is a fragile and sensory tribute to the sick and dying reefs. 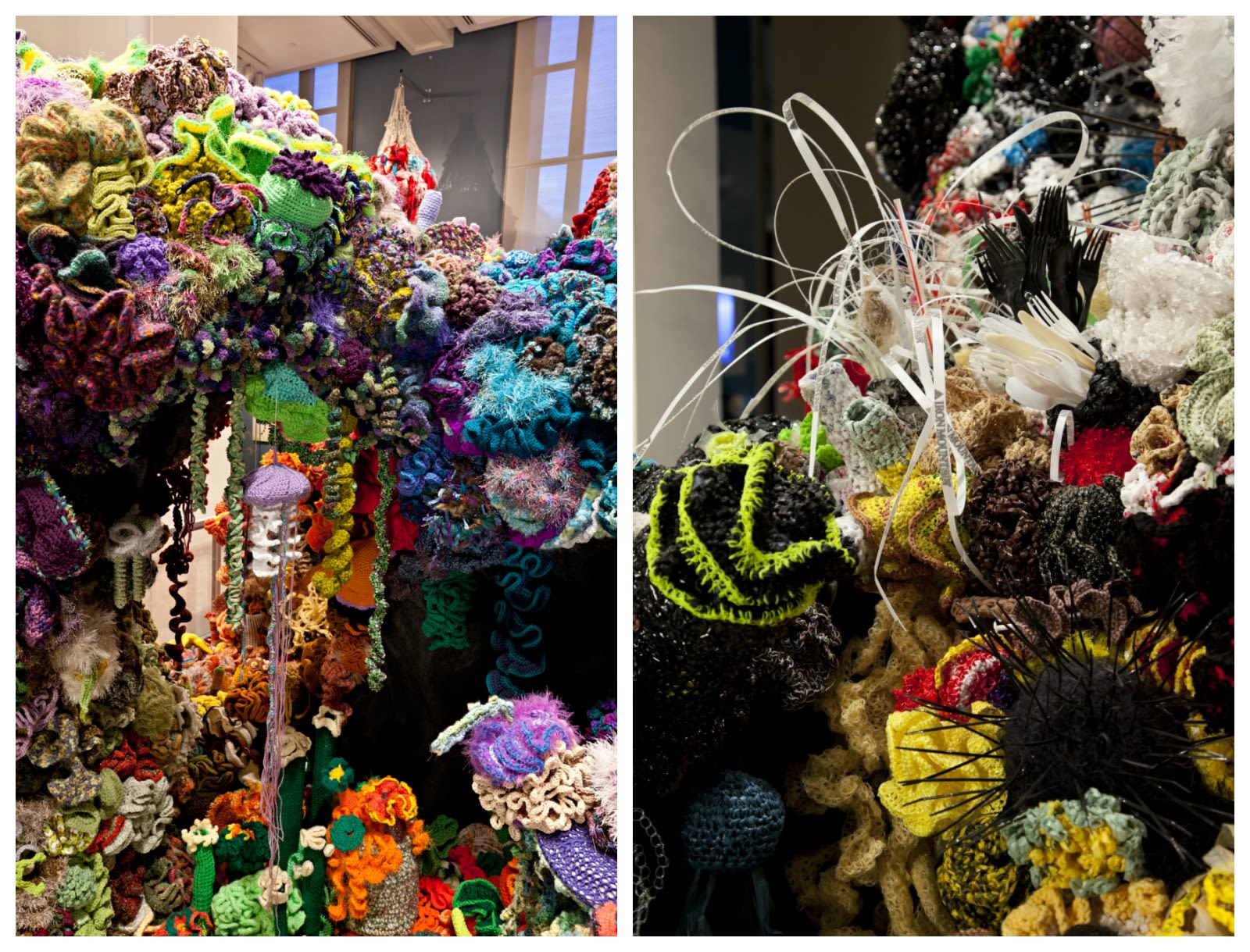 In the conclusion of his Grist piece, Bill McKibben entreated his readers to not only use their imaginations to create art, but also to bear witness to the rapidly changing world. “The world is never going to be, in human time, more intact than it is at this moment,” he wrote. “Therefore it falls to those of us alive now to watch and record its flora, its fauna, its rains, its snow, its ice, its peoples.”

Brooklyn-based artist Zaria Forman has done exactly that with exquisitely detailed large-scale pastels of the arctic landscape. The enormous pastel drawings Forman creates of Greenland’s icy blue landscape are so realistic they often require a double-take. The daughter of nature-loving traveler and fine art photographer Rena Bass-Forman, Forman made her first trip to Greenland in the company her mother. Rena had planned a return voyage (to recreate an 1869 art-inspired arctic expedition led by painter William Bradford) but did not live to make the journey. In August 2012, a year after her mother’s passing, Forman returned to Greenland with several other artists on the expedition trawler Wanderbird.

I interviewed Forman a few months after her return from Greenland, during her residency at the New Bedford Whaling Museum in Massachusetts. She said that although the original intention of the voyage was to “travel in the spirit of Bradford as artists and be inspired by the landscape,” climate change quickly became a major focus of the trip. “It’s the biggest thing that our society faces, that our generation faces, and generations to come. You can’t address or make work about Greenland and have that not be a part of it.”

In the years since then, Forman’s works have continued to capture the intense depth and beauty of icebergs that are rapidly disappearing. “On the trip,” she said, “there was this big sense of documenting this part of the landscape that’s not going to be here anymore. At some point it’s all going to be gone. It is melting. That’s happening, it’s not reversible.

The dystopian illustrations riff on the classic and familiar Works Project Administration posters originally produced by the federal government between 1938 and 1941 (and more recently reprinted and popularized by Ranger Doug). Burnt stumps take the place of once lush forests, dry lake beds and eroded river banks abound and native species are eradicated. By putting in jeopardy the parks the public holds dear, Rothstein brings climate change into the living room.

Rothstein was careful to include parks from all over the United States, hoping to spark a conversation about climate change that does not fall along partisan lines. “This is an issue that affects everyone,” she said by phone on Friday. “We need to be talking about it more. Even if you don’t want to accept it or agree with it. Even if people see these and think it’s BS, at least it will start a dialogue.”

For all the fire and desolation in her remade posters, Rothstein is not a pessimist. She still believes that we can prevent those images from becoming a reality and that art like hers can be a part of that. “Climate change is often presented in this barrage of words, numbers and graphs. It’s easy for that to go in one ear and out the other. But bringing a visual voice to the table can bridge that gap between information and emotion and as a result we need much more art about climate change to make the facts feel real,” Rothstein told us. Bill McKibben, echoing his sentiments from over a decade ago, clearly agrees: he tweeted out her posters last week.

Rothstein raises an interesting point. If climate change continues to be perceived by the public as an abstract and existential problem, steps to preserve our natural wonders won’t be taken until after potentially irreparable damage has been done. “There are no U-turns,” she reminded us. “If we mess this up, there’s no going back.”