Cape Town may seem a world away but it is not. Climate change is to blame for the drought in Cape Town and similar situations will abound near and far if we are not mindful of the limits of our planet in warmer world.

Cape Town is a city of 4 million people. Homes with children and the elderly. Hospitals. Businesses. Manufacturing. Food processing. Restaurants. Hotels. Vineyards. The coffee machine at work. The toilet. A bowl of pasta. Break it down from the birds eye view to your own and try to imagine half of NYC waiting in line for water to drink, bathe and cook for a family; a restaurant trying to maintain lunch rush as people continue to go to work; tourists standing in line for water to drink rather than visiting the Empire State Building. And no one here has a car. How are you supposed to carry 13 gallons of water to survive every day life on the subway? That is one of the challenges facing the millions in Cape Town.

Some of the issues facing Cape Town is poor planning for the anticipated “Day Zero” and more emphasis put on building desalination plants rather than looking for alternative sources of water. Only 54% of the population complied with the water restrictions. A city of extreme poverty and wealth, some will be able to make it to one of the 200 water distribution areas, and then what? Not everyone has a car. How do you get it all back? Every day?

I imagine Soylent Green and Fury Road rolled into one. Our imaginations have brought us the vision of such an event and now it is here. We did this. And there will be more. How to stop it? Be mindful of your water intake before an emergency arises. Conservation is the best defense against drought. Don’t wait until there is too late because there is no good technological fix for this. Water is all there is. We will perish without it. 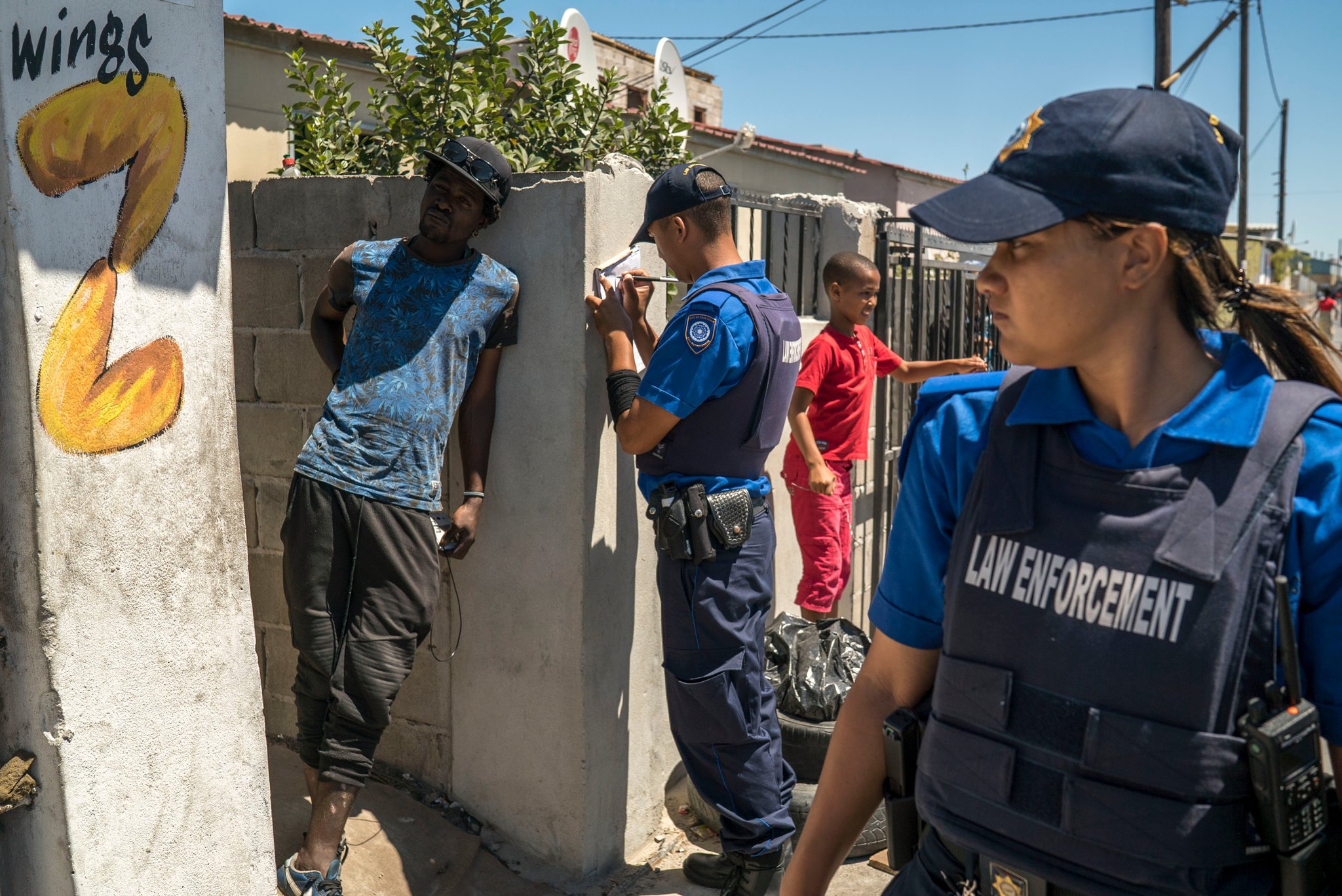 A roadside car-wash operator in Delft, a township on the outskirts of Cape Town, was fined the equivalent of about $250 for illegal water use. Joao Silva/The New York Times

CAPE TOWN — It sounds like a Hollywood blockbuster. “Day Zero” is coming to Cape Town this April. Everyone, be warned.

The government cautions that the Day Zero threat will surpass anything a major city has faced since World War II or the Sept. 11 attacks. Talks are underway with South Africa’s police because “normal policing will be entirely inadequate.” Residents, their nerves increasingly frayed, speak in whispers of impending chaos.

The reason for the alarm is simple: The city’s water supply is dangerously close to running dry.

If water levels keep falling, Cape Town will declare Day Zero in less than three months. Taps in homes and businesses will be turned off until the rains come. The city’s four million residents will have to line up for water rations at 200 collection points. The city is bracing for the impact on public health and social order.

“When Day Zero comes, they’ll have to call in the army,” said Phaldie Ranqueste, who was filling his white S.U.V. with big containers of water at a natural spring where people waited in a long, anxious line.

It wasn’t supposed to turn out this way for Cape Town. This city is known for its strong environmental policies, including its careful management of water in an increasingly dry corner of the world.

But after a three-year drought, considered the worst in over a century, South African officials say Cape Town is now at serious risk of becoming one of the few major cities in the world to lose piped water to homes and most businesses.

Hospitals, schools and other vital institutions will still get water, officials say, but the scale of the shut-off will be severe.

Cape Town’s problems embody one of the big dangers of climate change: the growing risk of powerful, recurrent droughts. In Africa, a continent particularly vulnerable to the effects of climate change, those problems serve as a potent warning to other governments, which typically don’t have this city’s resources and have done little to adapt.

For now, political leaders here talk of coming together to “defeat Day Zero.” As water levels in the dams supplying the city continue to drop, the city is scrambling to finish desalination plants and increase groundwater production. Starting in February, residents will face harsher fines if they exceed their new daily limit, which will go down to 50 liters (13.2 gallons) a day per person from 87 liters now.

Just a couple of years ago, the situation could not have looked more different here. In 2014, the dams stood full after years of good rain. The following year, C40, a collection of cities focused on climate change worldwide, awarded Cape Town its “adaptation implementation” prize for its management of water.

Cape Town was described as one of the world’s top “green” cities, and the Democratic Alliance — the opposition party that has controlled Cape Town since 2006 — took pride in its emphasis on sustainability and the environment.

The accolades recognized the city’s success in conserving water. Though the city’s population had swelled by 30 percent since the early 2000s, overall water consumption had remained flat. Many of the new arrivals settled in the city’s poor areas, which consume less water, and actually helped bring down per capita use.

The city conserved so much water that it postponed looking for new sources.

For years, Cape Town had been warned that it needed to increase and diversify its water supply. Almost all of its water still comes from six dams dependent on rainfall, a risky situation in an arid region with a changing climate. The dams, which were full only a few years ago, are now down to about 26 percent of capacity, officials say.

Cape Town has grown warmer in recent years and a bit drier over the last century, according to Piotr Wolski, a hydrologist at the University of Cape Town who has measured average rainfall from the turn of the 20th century to the present.

Climate models show that Cape Town is destined to face a drier future, with rains becoming more unpredictable in the coming decades. “The drier years are expected to be drier than they were, and the wetter years will not be as wet,” Mr. Wolski said.

As far back as 2007, South Africa’s Department of Water Affairs warned that the city needed to consider increasing its supply with groundwater, desalination and other sources, citing the potential impact of climate change.

Mike Muller, who served as the department’s director between 1997 and 2005, said that the city’s water conservation strategy, without finding new sources, has been “a major contributor to Cape Town’s troubles.”

“Nature isn’t particularly willing to compromise,” he added. “There will be severe droughts. And if you haven’t prepared for it, you’ll get hammered.”

Ian Neilson, the deputy mayor, said that new water supplies have been part of the city’s plans but “it was not envisaged that it would be required so soon.”

Cities elsewhere have faced serious water shortages. Millions of Brazilians have endured rationing because of prolonged droughts. Brasília, the capital, declared a state of emergency a year ago. Experts say the water shortages in Brazil, which have affected more than 800 municipalities across the country, stem from climate change, the rapid expansion of agriculture, bad infrastructure and poor planning.

Here in Cape Town, the water shortages have strained political divisions, especially because much of the responsibility for building water infrastructure lies with the national government led by the African National Congress.

“The national government has dragged its feet,” said David Olivier, who studies climate change at the University of the Witwatersrand’s Global Change Institute.

But the city made mistakes, too. Last year, instead of focusing on “low-hanging fruit” like tapping into local aquifers, the city concentrated on building temporary desalination units, said Kevin Winter, a water expert at the University of Cape Town’s Future Water Institute.

“It takes a lot of time to build desalination modules, three to five years, and at considerable cost,” Mr. Winter said. “They’re even costlier to build during a crisis.”

Mr. Neilson, the deputy mayor, acknowledged that “some time was lost.” The city, he said, had now “shifted our efforts dramatically.”

The city is stepping up its efforts to cut consumption. With water and time running out, Mr. Neilson said he was “acutely aware” of needing to scare people into changing their behavior without causing them to panic, adding, “I don’t think we quite got that right yet.”

So far, only 55 percent of Cape Town residents have met the target of 87 liters per day.

Helen Zille, the premier of Western Cape Province, which includes Cape Town, wrote in The Daily Maverick last week that she considers a shut-off inevitable. The question now, she said, is, “When Day Zero arrives, how do we make water accessible and prevent anarchy?”

Cutting back is a difficult message to convey in one of the world’s most unequal societies, where access to water reflects Cape Town’s deep divisions. In squatter camps, people share communal taps and carry water in buckets to their shacks. In other parts of the city, millionaires live in mansions with glistening pools.

In vast townships like Mitchells Plain, residents without cars wondered how they could even carry water containers home from a collection point.

Faried Cassiem, who works as a cleaner but does not have a car, said his wife would have to fetch water for his household of eight.

“There are so many guys just standing around, with no jobs, so I’ll just give them two rands to carry the water,” he said, referring to the equivalent of about 17 cents.

As Day Zero looms, some were stocking up on water at two natural springs in the city. Others were buying cases of water at Makro, a warehouse-style store.

In Constantia, a suburb with large houses on gated properties with pools, some residents were installing water tanks in their yards.

At one house, Leigh De Decker and Mark Bleloch said they had reduced their total water consumption from the city to 20 liters a day, down from 500 liters a day before the drought. Instead, they now draw from two 10,000-liter tanks of treated well water, and were waiting for two additional tanks to be delivered.

Several weeks before Day Zero, their use of city water should come down to zero, they said, estimating that it will cost them about $4,200 to become completely self-sufficient.

“It allows you to have a certain lifestyle without drawing on resources that other people need,” Ms. De Decker said.