What trends are you following? I’m loving all the collaborations that include humor and unexpected creative connections. I think that’s the trend to follow.

10 Critical Corporate Sustainability Trends to Watch in 2015 and Beyond

If the global business community is to thrive in the long term — and carry us to that flourishing future we are trying to imagine and help build — it needs to continue to scale up the ambition and influence of its efforts. That’s much easier said than done, of course, though we are seeing a number of encouraging trends within the Sustainable Brands community that, while still nascent, are promising to deliver a lot of value for years to come. Here is a list of 10 such trends that are top of mind for our team at the moment:

A few celebrities have been at it for a while (case in point: Matt Damon, who keeps evolving his work with Water.org, as in this recent partnership with Stella Artois), but we have certainly seen a significant increase in the number of famous faces appearing in sustainability-driven campaigns of all sorts. The growing list includes Pharrell and will.i.am’s involvement in promoting circular models around plastic waste with Bionic Yarn and Ekocycle, respectively; fashion icon Amber Valletta’s participation in Fashion Positive and documentary web series “Thread”; Julia Roberts, Harrison Ford, Kevin Spacey, Ed Norton, Penelope Cruz, Robert Redford, Ian Somerhalder and Lupita Nyong’o’s vocal contributions to Conservation International’s Nature is Speaking campaign; and Olivia Wilde’s role in promoting H&M’s Conscious Exclusive collection, among others. And then there is social media celebrity Prince Ea’s “Dear Future Generations: Sorry” video, which just broke the record for most viral environmental campaign to date with more than 20 million views in its first 24 hours and over 50 million views in the first week.

Transparency campaigns are becoming more common and being delivered in a growing variety of ways — whether through traditional media campaigns as in the case of SeaWorld, dedicated interactive websites hosting public discussions with consumers as in the cases of McDonald’s, Monsanto and palm oil trader Wilmar International, or innovative digital tools such as Stonyfield’s sourcing plan portrayed with the help of Sourcemap. While these and other similar efforts that have sprung up in recent months are all praise-worthy for taking steps toward opening up beyond the norm, not all have enjoyed equally favorable reception — there is a rather natural expectation in most stakeholders that once a brand goes into transparency territory, it has to go all in and not bend even small parts of the story; else, the risk is that said campaign gets labeled inauthentic and does potentially more damage than good.

4. Intensifying collaboration between the peer-to-peer and mainstream economies

Last year, SB ‘14 speaker Jeremiah Owyang documented more than 70 cases of mainstream brands taking part in the peer-to-peer economy in various ways, and the list has only grown since. New layers of value creation from peer-to-peer models continue to emerge, and the intersections with mainstream value propositions continue to grow in diversity, as well. Consider the case of GoodGym, a quickly growing group of UK runners who combine regular exercise with helping local communities – whether by visiting isolated elderly people or repairing various kinds of infrastructure. This peer-to-peer model has recently found a way to create even more shared value by partnering with mainstream footwear brand New Balance:

5. A growing ecosystem of players and initiatives around circular business models

A circular economy is a stunningly beautiful concept in theory, but until recently not many companies had taken specific steps towards making it a reality. It seems that has changed quite suddenly in the last couple of years, so much so that it’s getting hard to keep track of new players and initiatives entering almost daily now.

One of my current favorites is The Closed Loop Fund, an ambitious consortium of major brands that have created a $100 million fund aimed at providing municipalities access to zero- and low-interest loans to build comprehensive recycling programs. I am also impressed by creative new partnerships, such as the one between Goodwill and Uber, whereby Uber users could request a pickup for their donations to be delivered directly to their local Goodwill free of charge, or a new competition supported by Sprint and Net Impact that inspired students to generate new ideas about how to revive or reuse old smartphones and their components.

6. New horizons for city-brand partnerships in implementing new solutions together

The intersection of corporate and city sustainability is both exciting and relatively unexplored so far. It carries a lot of potential for win-win public-private partnerships, though it also requires deep knowledge and careful planning in a number of technical, social and cultural domains. Most brands seem to be in a let’s-wait-and-see position about it, but a handful are taking bold steps with ‘unusual’ experiments and partnerships. Ford, for example, has recently launched 25 fascinating mobility experiments and challenges with cities around the world, ranging from car-sharing on demand in London, to a vehicle sharing program for small communities in Bangalore, to remote-control-operated repositioning of vehicles in Atlanta.

7. Powerful synergies await us when our homes get truly connected and smart

Intuitively, it seems more than clear that there must be a number of fascinating upgrades coming to our houses and apartments to make them vastly superior and a lot more resource-efficient than they are now. Quite a few brands have had their sleeves rolled up, and tangible results are starting to surface. Whirlpool is one of the early active movers, having unveiled concepts for ‘homes with a conscience’ and ‘a socially networked kitchen.’ The company has also set up the world’s first retrofitted, live-in research, positive-impact home in partnership with Purdue University as both a working lab and a consumer engagement tool. Other major players include Wink, a new brand resulting from a partnership of GE and Quirky, which has released a number of smart home products under the entertaining tag line, “Like a robot butler, but not as awkward.” 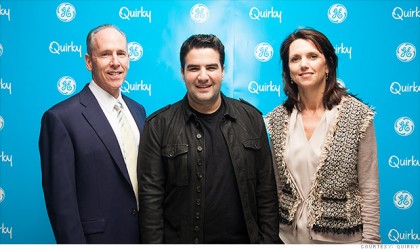 8. Major pivots in favor of shifting product portfolios with sustainability-driven criteria in mind

To shift a significant enough fraction of a product portfolio to align with a new sustainability strategy, and set an industry precedent in the process, is no small feat. Few have accomplished that to date, even among brands commonly considered leaders in corporate sustainability. Chemical giant BASF stands out to me as a textbook example, having just gone through a process that evaluates 50,000 product applications in the company’s portfolio, representing sales of €56 billion. The analysis took a couple of years to complete, involved 1,500 experts, and resulted in more than a thousand — yes, a thousand — specific plans for changing or phasing out products. Some consumer-facing brands have taken similarly ambitious actions — CVS famously quit cigarettes for good last year; Panera Bread just announced it is committing to removing a ‘No No List’ of over 150 ingredients from its menu in an effort to eliminate artificial colors, flavors, sweeteners and preservatives; and big retailers Walmart and Target are both taking steps toward organizing subsets of their product portfolios filtered by sustainability criteria.

Make no mistake — these kinds of models are coming, one way or another. Multiple forces are pushing in that direction, including revitalization of urban environments, the slow but steady evolution of 3D printing, and novel partnerships driven by reenergized engagement of local stakeholders-turned-business partners. A great example of this last force is the Backyard Hoodie project, a collaboration led by The North Face that launched an experiment aiming to produce a hoodie — from seed to garment — from within 150 miles of the San Francisco Bay Area. While the pilot round wasn’t 100 percent successful (the process had to rely on one step outside the 150-mile range), it is showing tremendous promise that will surely prompt other major brands to play with similar concepts.

For almost a year now I have been intrigued by two novel types of dual-purpose employee-engagement strategies designed to make a difference for employees and external beneficiaries alike. One is a new type of corporate partnership that micro-lending platform Kiva has been perfecting with partners such as HP and Google, allowing employees to lend to aspiring entrepreneurs in over 80 countries. The second strategy, popularized by HIP Investor, involves rethinking how 401(k) packages are put together so that employees can be confident that their retirement accounts are on a good trajectory while acting as impact investors at the same time.

I hope that you’ll find the rather brief analysis of these 10 trends useful, and I’d love to hear whether you agree, disagree, or have other trends to suggest as equally important in the Comments section below! We’ll be exploring these 10 trends in a lot more depth at Sustainable Brands ’15 San Diego in early June and I’d love to chat in person there if you join us.

Dimitar is the Director of Content Development at Sustainable Brands. He joined the team after earning a Master’s degree in Management Science & Engineering – focused on sustainable business – from Stanford University. Before Stanford, Dimitar worked in international development… [Read more about Dimitar Vlahov]