The airline industry is a complex and multi-faceted machine whose reach spans the whole of the global economy. But the baseline remains: climate change effects everyone. 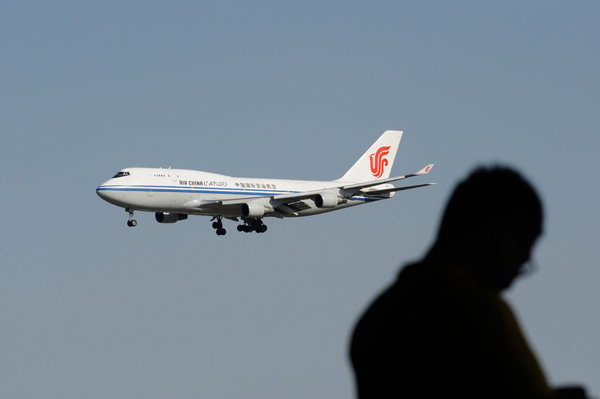 BRUSSELS — The European Commission said Thursday that Air China and Air India were among 10 Chinese and Indian airlines facing the prospect of fines and exclusion from airports in the European Union for refusing to comply with rules aimed at regulating greenhouse emissions.

The carriers are accused of not providing emissions data, as required by the European rules, and not participating in a permit system that entitles airlines to emit greenhouse gases in European airspace.

The volumes of carbon dioxide that the European Commission said the 10 carriers emitted through their jet engines in Europe last year was comparable to the emissions from burning about 130 rail cars of coal.

The commission said the eight Chinese carriers could face fines totaling €2.4 million, or $3 million, and the two Indian airlines face total fines of €30,000.

So far the emissions rules apply only to flights within Europe, and European carriers and most non-European airlines have complied. Still hotly debated, though, is the planned expansion of the system next January to include international flights in and out of Europe.

Japan, Russia and the United States, as well as China and India, were among about two dozen countries that protested against that expansion early last year.

The resistance by the Chinese and Indian airlines to even the intra-Europe part of the program highlights the fierce opposition, particularly in emerging economies, to environmental rules imposed by Europe on companies and organizations in other parts of the world.

No airlines have been fined yet for violating the permit system, and the program does not present them with huge costs, at least initially. The system has added less than €1 to the cost of flights from, say, Paris to Rome.

The warning Thursday to the Chinese and Indian carriers derived from their failure to report their emissions to the national authorities and their missing of an April 30 deadline for handing over sufficient numbers of permits to the national authorities to cover their emissions last year. The European Commission, the Union’s administrative arm, which made the announcement, oversees the system.

Connie Hedegaard, the Union’s commissioner for climate action, said there was no excuse for the airlines to ignore Europe’s system.

“It’s not so that when we make our European laws, then we say they count for everybody except for Chinese and Indians — and that is no different in the aviation sector,” Ms. Hedegaard. “It shows how controversial and difficult it is to get to the adequately ambitious outcome we need in global aviation.”

Officials from the Chinese Mission to the European Union did not have any immediate comment. The Indian authorities, and officials at Air India and Jet Airways, the other Indian airline accused of violating the Union’s rules, could not immediately be reached for comment.

The resistance by the Chinese and Indian carriers against going along with even the intra-European portion of the emissions regulations is only one of the snags in the Union’s program, which is the world’s most extensive effort to control greenhouse gases like carbon dioxide. It relies on the use of permits for the right to emit at certain levels, essentially requiring producers of greenhouse gases to pay for the right to emit them.

The system was established eight years ago, initially to cover heavy industry in Europe, but it has lately been on the verge of collapse. That is in large part because the weak European economy has somewhat curtailed emissions- producing activity, weakening demand for the permits. Another factor is that the national authorities gave too many permits away to sectors like the steel industry. Prices are currently at levels too low to force polluters to change to cleaner practices.

By expanding the program last year to include airlines, and the greenhouse gases emitted by jet engines, the European Union made its farthest-reaching move yet to protect the environment.

Other major airlines flying intra-European routes like Aerovias de Mexico, American Airlines, Cathay Pacific of Hong Kong, Emirates of Dubai, Qantas of Australia and Singapore Airlines have complied by supplying emissions data and by handing over permits accounting for their emissions.

But airlines do not have to account for their intercontinental flights leaving from, or arriving at, European Union airports until Jan. 1, 2014. Last November, after an international outcry, the Union decided to delay the planned debut of the expanded system by one year.

China, India, the United States and others say the European Union has no right to charge for emissions on routes that are mostly outside European airspace.

The European Union’s program, called the Emissions Trading System, already covers about 11,000 factories and power plants across the Union. Major polluters need to show each year that they have acquired a sufficient number of permits — many initially granted for free by the national authorities — to compensate for their greenhouse gas emissions.

Each permit represents a ton of carbon dioxide.

So far, many airlines have received about 80 percent of their European Union permits for free to help them adjust. But those handouts are based on past measurements of emissions, and so airlines with rapid growth rates could face substantially higher costs in the future if they have to start buying more of their permits.

The price of permits lately has been about €3.65 per ton in the international trading market that has emerged for the permits. But that market has been affected by the depressed level of industrial production in the weak European economy, leading to a lack of trading volume, and by a large number of free permits still in circulation.

Permit prices could rise substantially, though, if that market activity picked up. Higher prices might begin creating the financial incentives against greenhouse gas emissions that designers of the European system originally envisioned.

The warnings the European Union issued to the Chinese and Indian airlines were brought about by the carriers’ not accounting for their intra-European emissions during 2012.

The Chinese and Indian carriers began snubbing the system last year, refusing to share information with the European authorities about their pollution. Last June, the European Commission warned that the airlines were guilty of “systematic nonreporting” of their emissions.

The fines the Union said Thursday that it might impose are based on provisions in the rules stipulating that violators pay €100 for each ton of carbon dioxide not covered by a permit.

Each of the Union’s member states supervises a certain number of airlines. In the case of the Chinese and Indian carriers, the commission must rely mainly on Britain, France and Germany to issue further warnings and impose fines, if necessary. Repeated breaches by the airlines can lead to a ban from using airports in the European Union.

But the British, French and Germans probably have little appetite for a confrontation with China and India, which could cause the Asian countries to cancel orders for Airbus passenger planes — among Europe’s most important exports. France and Germany each hold 12 percent of Airbus’s parent company, European Aeronautic Defense & Space. Airbus generates about 100,000 British jobs, according to the company.

In a letter to top Chinese aviation official last November, after the Union pared back the system to cover Europe-only flights, Airbus’s chief executive Fabrice Brégier wrote that the company had been “very active” in preventing application to international flights.

“I hope we at Airbus have been able to clearly demonstrate our strong support to Chinese aviation,” he wrote.

Though many airlines have tried to reduce their carbon footprints through technical innovations like more efficient aircraft designs and biofuels blends, European officials say there are few technologies for substantially reducing emissions — leaving market-based trading systems as the most cost-efficient option for prompting airlines to find solutions.

The Union’s goal is to speed up the adoption of greener technologies at a time when air traffic represents about 3 percent of global carbon dioxide emissions and is growing much faster than gains in efficiency.

Ms. Hedegaard also emphasized that Europe wanted to implement the plan because 15 years had gone by since the International Civil Aviation Organization, a U.N. agency, was given the task under the Kyoto international climate treaty of coming up with a way to regulate greenhouse gases from aircraft.

The United States has not ratified the Kyoto Protocol, unable to muster sufficient support in the Senate.

Nancy Young, the vice president for environmental affairs at Airlines for America, an industry group, said that full application of the E.U. trading system, beyond internal European flights, could cost the U.S. airlines about $3.1 billion through 2020. The group supports voluntary fuel efficiency targets for the sector, which she said “doesn’t need an exorbitant tax to incentivize the industry to go green.”

Message from Mars: How to institutionalize sustainability

Message from Mars: How to institutionalize sustainability Erica Hauver Monday, June 18, 2018 – 1:59am Mars has generated numerous headlines by committing $1 billion to achieve the company’s Sustainable in a Generation Plan. A billion dollars is a lot of money, even for Mars. But leaving aside the substantial funding, the announcement could be seen […]